2020 was a complete shit year, yet this yearly traditional post must still continue. These are my 2021 New Year’s Resolutions in no particular order: 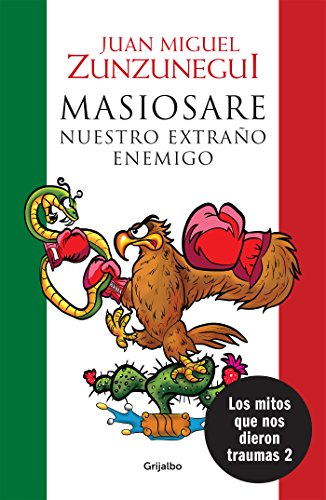 Masiosare, nuestro extraño enemigo (Masiosare, Our Strange Enemy) is the sequel to the fantastic book Los mitos que nos dieron traumas. This series of books are an attempt to try to describe the sociology and idiosyncrasy of the Mexican people and its culture. Unlike the first book, this sequel does not take a comedic approach when describing such complex topic. Instead, it is really a well crafted novel of Mexican history and economics.

Personally, I find it difficult to fully comprehend the political nature of The Mexican Revolution. This book does an excellent job describing this. It breaks down the war into different episodes. Were it might sound a little repetitive, albeit necessary to fully understand the entire political environment.
As I originally mentioned this book does not take a comedic approach, however some of the actual generic views and sociology of the Mexican people are flat out hilarious. For example taking the Mexican Revolution War as an example, in current Mexico all factions minus the original ruling dictatorial government are seen as heroes. Forget the fact that all factions turned on each other causing a full scale war over the entire country that lead to the deaths 1-2 million people. Yet, in current Mexico they’re all seen as heroes, and the war is seen as a revolution even though in fact it was civil war whose end goal was a political power grab.

This book takes a really strong approach against The Mexican Revolution War (ie civil war) and its profound negative long-term effects had, culturally, politically, and economically.

Overall, this book is well worth the read even if you don’t know or care about Mexican history and politics. If anything, you’ll want to read this book if only to learn why Mexicans hate each other, and why they hate foreigners even more. 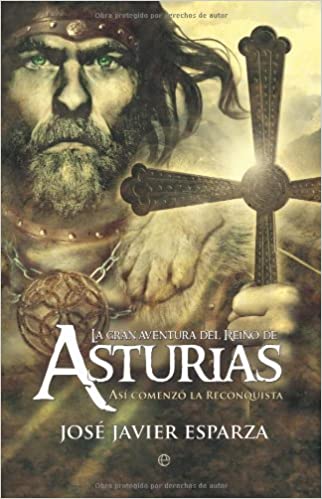 La Gran aventura del reino de Asturias: Asi comenzó la reconquista (The Great Adventure of The Kingdom of Asturias: How the Reconquest Started) has been probably my favorite read of 2020. This book is fantastic. It narrates the history of the Kingdom of Asturias starting from the Visigothic Kingdom, and its fall under the hands of the Umayyad Caliphate, to later its evolution to the Kingdom of Leon. You’ll read about the different phases of the Asturian kingdom. From surviving annihilation, to consolidation, and finally expansion. You’ll read about the birth of the counties of Castile and Portugal in liege to Asturias, the establishment of the Kingdom of Navarra, and birth of the Frankish counties of Aragon and Catalonia. Also the role that the Franks played during this era.

An important element of this book that I really enjoyed is that it goes equally into incredibly detail of the history of Al-Andalus.

The history of The Kingdom of Asturias literally felt like it came straight from an epic fantasy novel. I love reading fantasy novels because of the incredible immersion they provide, and I definitely felt deeply immerse reading this book. Not to mentioned that Kings, Knights, battles, political intrigue, and magic are included here! Which was very fitting when I saw the following tweet posted by the official Spanish tourism account:

Don’t get weirded out if you come across a fairy or a dragon in Covadonga! We could swear this place comes straight out of a fairytale! #VisitSpain #Covadonga #SpainCulturalHeritage @TurismoAsturias pic.twitter.com/VTxLJjgEZl

The author’s eloquent writing is fantastic, and to be admired given the sources during this period of history are limited. He constantly reminded us what is myth and what possibly happed. I really hope this book gets an English translation soon, so everyone can read and learn the spectacular history of The Kingdom of Asturias. 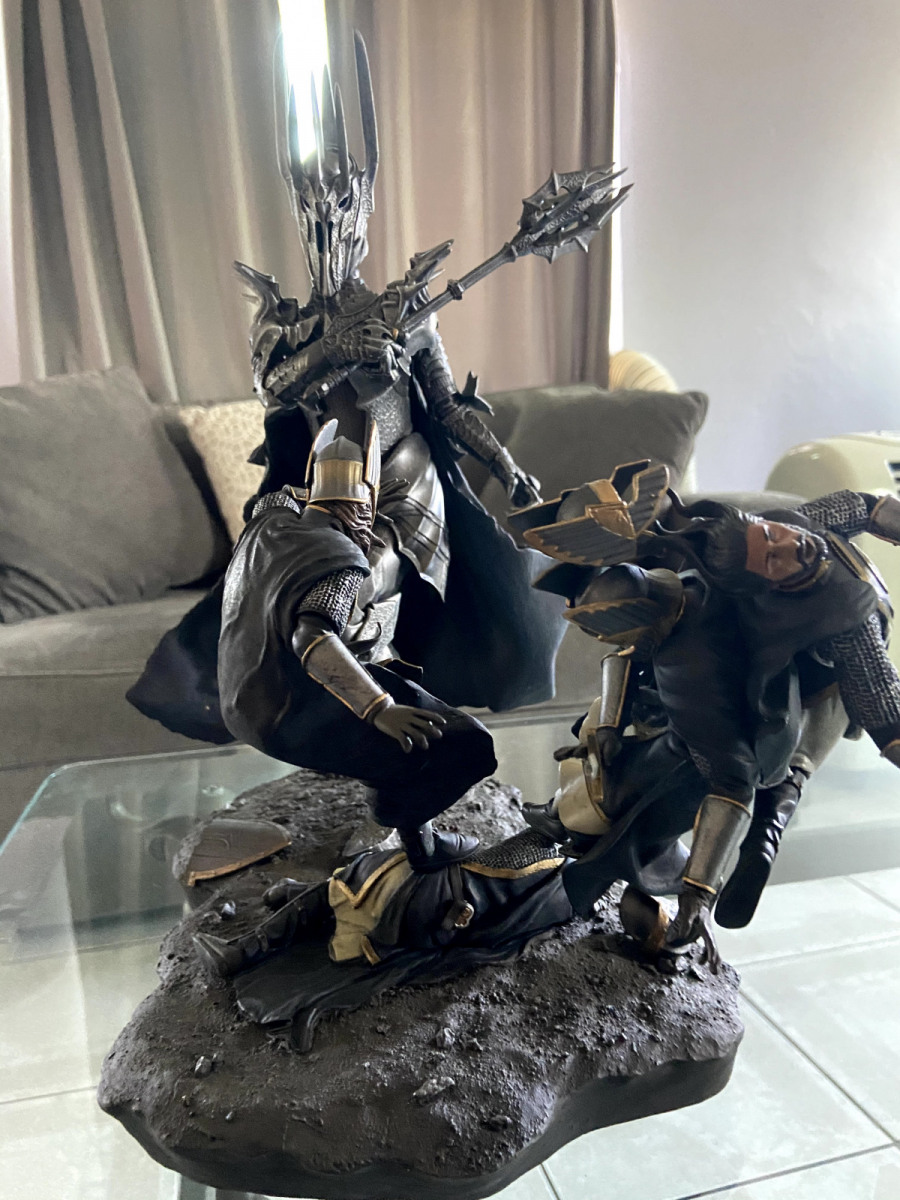 For quite some time, I’ve been wanting to buy the Sideshow Collectibles Battle of The Last Alliance: Sauron Vs The Numenorean Army Diorama statue. Originally release in 2010 with an edition size of 700 units made. Finding the statue for a decent price hasn’t easy, and I wasn’t willing to pay the reseller’s two to three times of its original price of $300. Needless to say, patience has its reward, as I was able finally buy the statue for just above its original retail value. The statue is roughly 1:10 scale, and although it’s fairly small compared to my other 1:4 statues, the detail on it is fantastic. Even for a ten year old statue.

My statue collection continues to grow, and with my Moducases soon to be arriving, and my current existing pre-orders, it will continue to grow. Exiting times for my newly expensive hobby.

The Geralt of Rivia Skellige Undvik Armor statue is my fourth Prime 1 Studio statue in The Witcher 3 line. This time around, I opted to get the exclusive version since it was different and compelling enough for me to consider alternating with the regular version. This exclusive head sculpt is based on the fantastic “Hearts of Stone” expansion, so to me it was a no brainer. Although, the armor is not necessarily one of my favorite’s, in the statue itself is extremely well detailed. Just like the rest of my Prime 1 Studio Witcher statues, the incredible detail of the sculpt and paint on this statue is absolutely fantastic. People may find it shocking to see a $800 plus price tag on these statues, but looking at them in person, you see these beautiful pieces of art come with a hefty price tag. 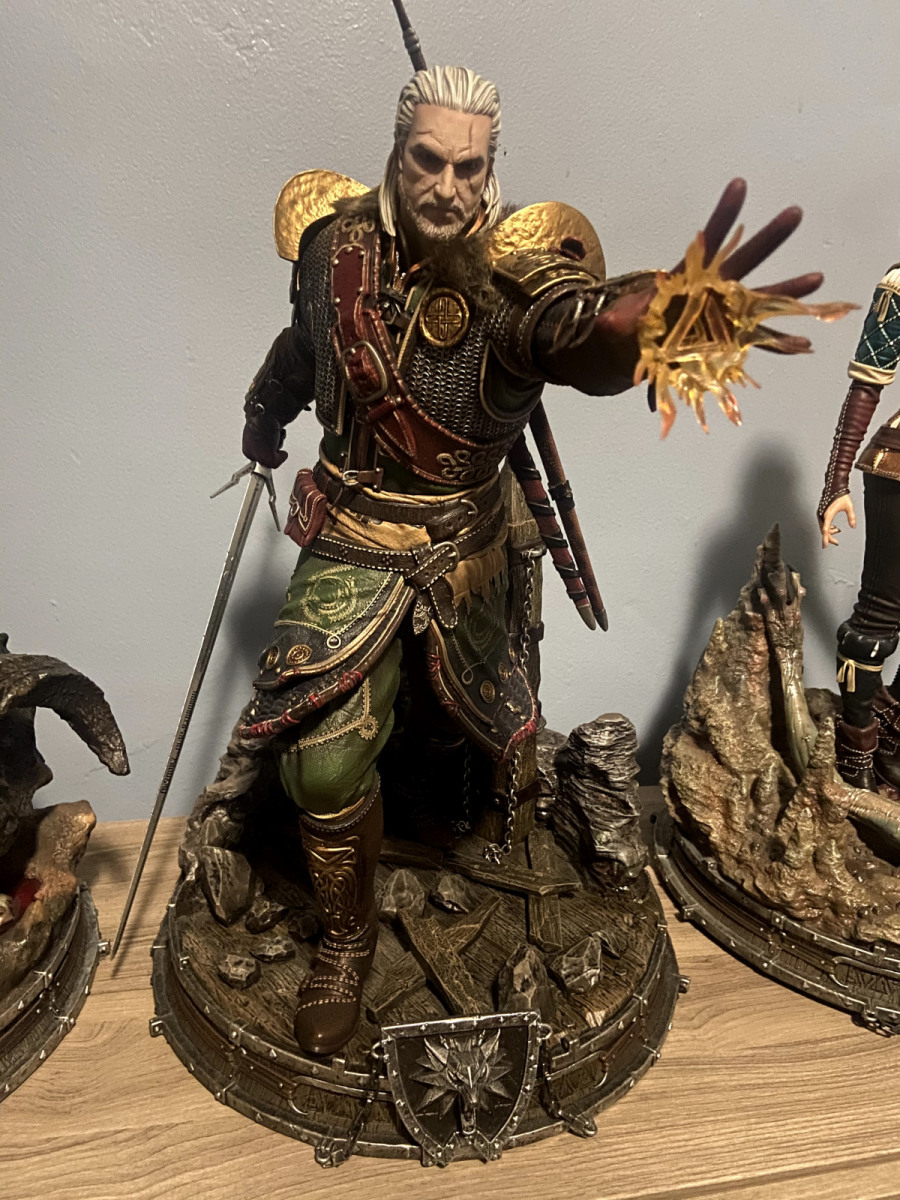 I have numerous statues by Sideshow Collectibles and Gaming Heads, and I must say Prime 1 Studio completely blows both out of the water. The detail on this statue (and all of Prime 1 Studio statues) is absolutely incredible. 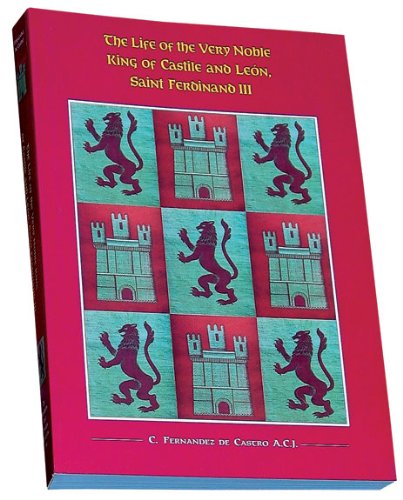 The Life of the Very Noble King of Castile and Leon, Saint Ferdinand III is a very interesting book. To start, I mistakenly thought it was a chronicle of this legendary Spanish king. Instead to my surprise, this book was written as a novel. This novel is a biography of histories’ most successful crusader king. It can be divided into different stages of St. Fernandos life. Starting from his childhood and upcoming, his relationship with his estrange father, and the importance of his mother. The famous, and somewhat cliché quote “behind every great man is a great woman”, is certainly truth with Fernando III and his mother Berenguela of Castile. Then, like just very great king, you’ll read about the different rebellions and difficult Fernando had once he came to power. Lastly, the bulk of the book deals with the military campaigns in Andalusia.

A very interesting thing about this book is its title. In Spanish, the literal translation of this book’s title is Our Lady in the Saddletree. Upon reading this book, you’ll learn why that’s the title described here is the subtitle. This translation is a fairly easy read, although I haven’t read the original source, from what I’ve learned, it uses a more poetic archaic Spanish. This really picks my interest since I love such type of works.

The only drawback of book is that the annotations are fairly limited. Which is understandable as this book written by the nun María del Carmen Fernández de Castro Cabeza, to give homage to St. Fernando, and not by a historian as a scholarly work.

As I dropped off my mail-in voting ballot earlier today, I was reminded why I stopped posting politics related content on this blog for the last four years; the primary reason being because it wasn’t healthy to my psyche. That is to say these last four years have been an absolute disgrace and a sad reality as to how low and divided we’ve fallen as a society.

Due to a project that I’ve been working these last few years, I’ve done quite of bit of research regarding some of histories fallen empires: Rome, Toltec, Tepaneca, Mexica, Purépecha, Inca, Spanish, Byzantine, and even the Ottoman Empire to some extend. Whether eventually history repeats itself and this becomes the beginning of the end. Theirs absolutely no doubt that these last four years have altered the shift of this country for future generations to come. With the immense wealth of examples of lack of basic logic and common sense, future historians are going to view 2016-2020 U.S. and say “Social discord and mass stupidity started it all”. 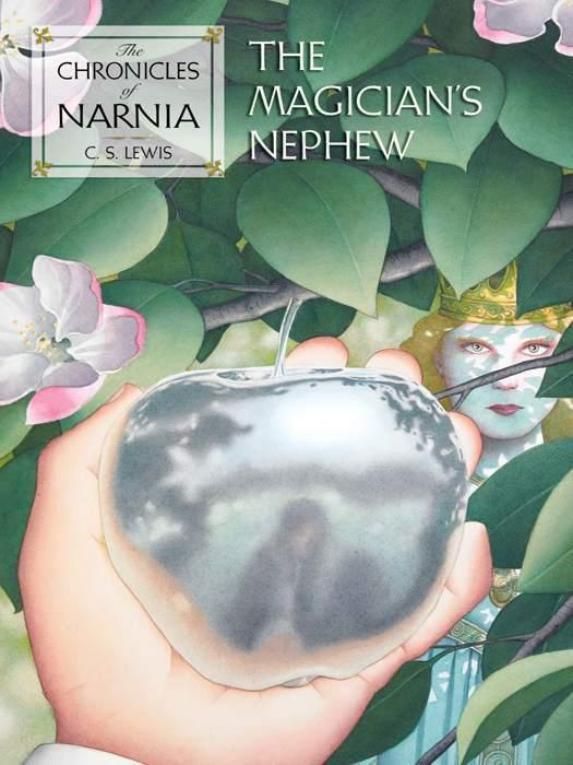 Technically Book 1 in chronological order of The Chronicles of Narnia, in The Magician’s Nephew we learn about the creation of Narnia itself and how it was marred by The Witch. Although the plot is different to The Lion, the Witch and the Wardrobe, to me this prequel fit in perfectly. The creation story, like much of all of The Chronicles of Narnia, it is very simplistic (which is not a bad thing). It obviously can’t compare to Tolkien’s creation story described in Ainulindalë. Regardless, it’s still a beautiful story.

It’s no secret that C.S. Lewis’s works are heavily Christian based, this book is no exception. So being essentially the Genesis of Narnia, it is a very beautifully Christian themed novel.

It must be because C.S. Lewis’s books are primarily middle grade novels, I tend to found his works to be very comforting to read. I literally read this entire book in one sit-in. Where other books (short or long), I usually have to take a break to let my brain absorb what I’ve just read. Which with C.S. Lewis, is not the case for me. 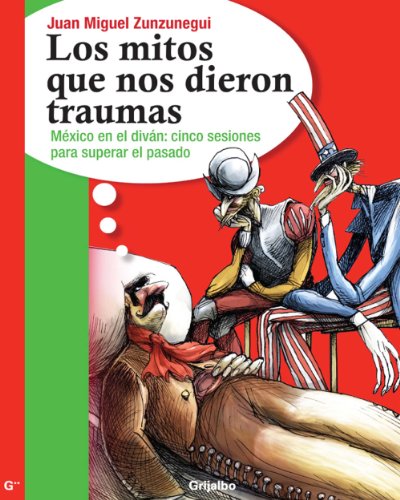 The Myths That Traumatized Us, is book that attempts to explain the idiosyncrasy and sociology of Mexicans. Rather than being presented in a direct dry political and historical standpoint, this book uses a comedic approach that I think it’s absolutely genius. The author makes it very clear and states multiple times that he could care less about what part of side of a political spectrum the reader falls on. Overall this was such an enjoyable read, I lost count of the times the times I was literally was laughing out loud multiple times (my family might even think I’m mad given that I read most of the book really late at night).

Mexicans, generally speaking have such a distorted view of their history. This book takes a logical and common sense approach on why that’s the case. The main myths this book covers are:

Perhaps the only thing that really rubbed me the wrong way was the comparison between Spain and England, (Catholicism vs Protestantism; Mexico vs USA) and their respective visual of a society, which I completely disagree with the author.

Sadly this book does’t have an English translation as of the time of this writing, but if you know Spanish then I would highly suggest reading this book. Specially if you need a good laugh for once. 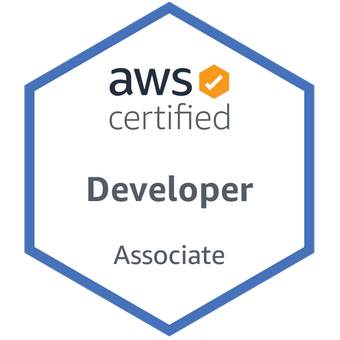 About a year late, but completed nonetheless. The only resources I used to pass this certification exam were A Cloud Gurus’s AWS Certified Developer – Associate 2020 and Stephane Maarek’s Ultimate AWS Certified Developer Associate 2020 both of which I highly recommend. Specially Stephane Maarek’s course, all of his AWS training courses are extremely good.

This is the third AWS exam that I’ve taken, and I must say this has been the most difficult one yet. Mainly because it touches a lot of services that I don’t generally use on a daily basis like DynamoDB, API Gateway, and Cognito. Thus said, these are not extremely complex AWS services so learning them for the first time wasn’t too terrible.

My next goal is study and pass the AWS Certified SysOps Administrator – Associate certification exam to complete the trifecta Associate level certifications.