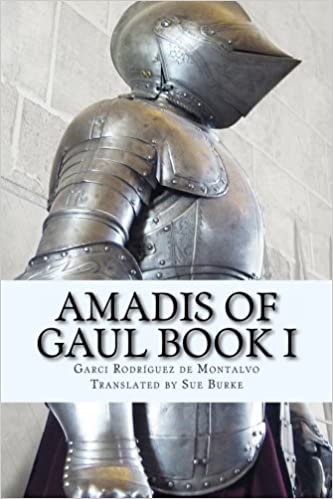 I first heard of Amadís de Gaula while reading Don Quixote  as it was Amadís that Don Quixote modeled himself as too. So given this, I was naturally interested on reading the source material that caused Don Quixote to go mad. Aside from Don Quixote, this is my very first dive into the world of classic Chivalric Romance literature. This version is divided into four volumes, and written by Garci Rodriguez de Montalvo. Although it was published in the early 16th century, the actually origins of this fictionally story can be dated back as far as the mid 13th century. Even the author mentions what parts of the story date to the original myths and legends and what belong to those that he wrote and extended.

In this introductory volume, we read about the origins of young knight and prince named Amadís. Like all other heroes, Amadís upbringing is rather spectacular. In this fictional world, Amadís is destined to be the greatest knight in the world, so in it we get to read his adventures from his birth to his service within the different realms. While being quite unique, Amadís de Gaula is medieval Spain’s own interpretation of Arthurian legends. So in here we get to see different British kingdoms as well as other mythic characters like giants, wizards, sorcerous, and even dwarfs. As well as the typical setting of royal courts, knights and damsels.

I read the English translation by Sue Burke, and I think she did an excellent job translation the novel. Keeping the archaic Spanish elements to its English equivalent, all while still having the writing be easily comprehensible.Overall, if you don’t mind the traditional “damsel in distress” trope (which can get rather repetitive at times), and you want to learn why Don Quixote loves Amadís de Gaula, then this is a highly recommend read.