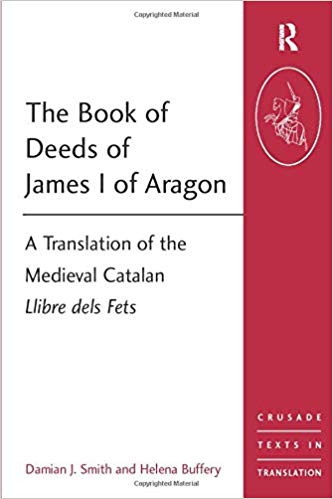 As a follow up to Saint Fernando III: A Kingdom for Christ, I opted to read The Book of Deeds by James I of Aragon. King James was a contemporary with King Fernando, and also like Fernando III of Castile, James I of Aragon was a great crusader king. This book is Jame’s autobiography written and narrated by him. In addition of having the distinction of being the only monarch to have written an autobiography, James also had the longest reign in all of the high and late middle ages. In this book we get to see why just about everything of Jame’s life was spectacular.

This book can be mainly divided into three parts, first we to start of reading about his parents, then we go into his troubled youth as the heir to The Crown of Aragon, and the different rebellions within his nobility. The second part, which is the bulk of his book is the content regarding his crusades on capturing the kingdoms of Majorca, Valencia, and Murcia. This is where we get to see why he is known to history as James “The Conqueror”. Finally, the last section is mostly regarding how he incorporated the conquered territory, and the problems he faced doing so.

The book itself is a literal translation from medieval Catalan to English, which to be honest I found it hard to read at times. Thus said, the book is fully annotated by the translators, providing more details that put into context what James is narrating. I would’ve probably understand more if I would’ve read a Castilian (modern) translation instead, but I would’ve not gotten the additional benefit of reading the translator’s annotations.

I’m a massive Tolkien fan, so seeing James’s devotion to Our Lady during dire times seemed similar to how the elves revered Varda in their times of need. Another thing that struck me, was reading about the division and even hostility between Aragonese and Catalan factions in Jame’s nobility and army. A division, albeit different that can be seen today in Spain over 800 years later.

Overall if you’re interested on learning about life in the middle ages, even if you’re not fully interested in the history of Spain, or in the crusades; this book is still a fascinating read and would highly recommend it.